A guide accompanies you throughout this two-hour city tour in the unique experience of discovering two different worlds that are still present on the streets of Elisabetin quarter.

Revolutionary Art Nouveau introduces you to two pages of revolution of the 20th century: one at the beginning of the century, the other at the end of it; one as an art movement, the other as a political regime, one in the figurative sense and the other in its proper meaning.

The tour starts in Elisabethin neighborhood and is completed by a visit to the “Communist Consumers Museum” at Scart Bar where you have the opportunity to step into an almost forgotten world, which left its mark on the city for decades. The visit ends with a discussion by a glass of wine (optional). 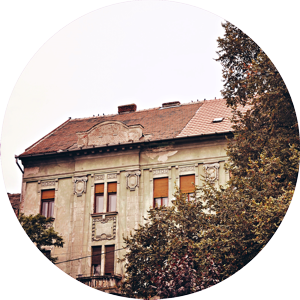 Elisabetin district of Timisoara reflects the presence of Art Nouveau style nowadays through the abundance of ornaments inspired by nature (florals, insects and animals or human bodies) that adorn the facades.

This extravagant note that is decorating the buildings mostly exists thanks to famous Hungarian architect Laszlo Szekely. The merits to the city brought him posthumously the title of “honorary citizen of Timisoara” in 2002.

In the same century, decades later, a political regime is ending following the 1989 communist revolution, born somewhere between districts Iosefin and Elisabetin.

Revolutionary Art Nouveau relates to two forms of revolution, just as important as different they were. Just as Art Nouveau revolutionized through its artists their ways of expression, thus stepping into the 20th century modernism, so the Romanian citizens have changed the course of history as well through the revolution of 1989, heading toward new ideals.