Cosmopolit wants to invite you on a 1.5h tour through the former craftsmanly and multicultural district of Timisoara .

Known as Fabrikstadt (German) or Gyarkülvaros (Hungarian) this quarter refers to the many manufactories which began their activity back in the 1718.

A guide joins you throughout this city tour, walking you through the charming and authentic Fabric neighborhood, presenting you its incredible history.

The tour ends with a visit to “Timisoreana” brewery (founded in 1718), where you can enjoy a fresh draft beer and some traditional meal products.

To your attention: Brewery restaurant offers a vast selection of traditional products 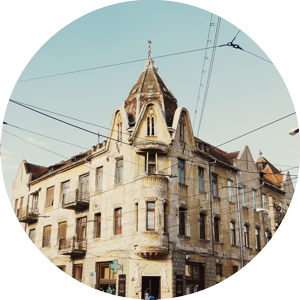 Traian Square represented a focal point of that time. Known under names such as Hauptplatz (German) and Kossuth ter (Hungarian), Traian Square was built according to the military blueprints of the city and was known as a copy of a smaller Unirii Square from the Old Center.

All products and goods manufactured in this neighborhood were consistently delivered to distributors and consequently to the city’s citizens. Soon, all consumers of those products were able to confirm the incontestable quality of Fabric district producers.

After Hungarians, Serbs, Germans and Romanians have shaped the Fabric district in 1750, during the industrialization process other minorities began to make their appearance as well, fact which continued to influence the character of this neighborhood. Besides Hebrews, Greeks and Armenians, Spanish, French, Italians and Czechs also found a home in this neighborhood of Timisoara.

This multicultural diversity has brought a fascinating influence upon the mentality of the local citizens. In this way, during the urbanization process, a myriad of restaurants, summer gardens and hotels began to arise. Especially famous was the beer “Fabrikshof” (Timisoareana today), which we will have the chance to savor at the end of this tour.

This tour through “Fabric” quarter opens the curtains of a long-forgotten scene and reminds us of the time when, despite the cultural and religious differences, the minorities of this place lived together in peace and harmony.